This paper was produced in the framework of the project “Mediterranean identities – respect of multiple identities in the mediterranean public space: north south crossed views on sexism and racism | Marseilles – Rabat“, axis Development & Citizenship

«It is not because identities-relationships are open that they are not rooted. But the root is no longer a plug, it no longer kills around it, it traces, encountering other roots with which it shares the juice of the earth. » (E. Glissant)

Initiated between Marseille and Casablanca, the project “Mediterranean Identities” aims to create bridges between actors with varied backgrounds and luggage on each of the two territories and between the two shores of the Mediterranean. The challenge is to enable high school students and students to appropriate the tools of debate and reflection, offering them, for a year, to participate in a cycle of consciousness-raising and actions concerning the impact of racist and sexist discriminationson on the construction of a Mediterranean citizenship and a common public space. By crossing their views, they understand the way in which individual identities are constructed by stacking and by belonging to spheres that vary throughout their life-course.

“Do you feel Mediterranean?”

In their documentary “In Search of Mediterranean Identities“, high school students of the 2nd grade 1 of the Lycée Artaud (13013), in collaboration with the association Les têtes de l’art, traveled the streets of Marseille, camera in hand, questioning several people on their perceptions of the notion of identity in the Mediterranean. From the curator of Marseilles’History Museum, to the fishmonger on the Old Port, including the students themselves, the testimonies were collected on identity issues in the Mediterranean. “Before, when they told me Mediterranean, I was thinking of the sea, of the sun… I was not thinking of other cities,” says one of the girls.

For their part, the students of the  L.E.A Master of Aix-en-Provence, mobilized teenagers of the Airbel housing estate (13011) in collaboration with the association AFEV, as well as a class of CE1 of the school Jean Moulin II in Sénas (13560). The cycle of consciousness-raising and reflection, focused on discrimination, spread over several months and gave rise to the documentary “Tous Méditerriens“.

The project spans the other side of the Mediterranean where volunteers from the Association Urban Initiative are taking action. This neighbourhood association, located in the municipality of Hay Mohammedi in Casablanca, provides young people with a space of personal development, academic support and citizen expression. The students go there to take tutoring classes, and as years pass, they become volunteers and end up giving the class to the youngest. The association has been seizing the Identités Méditerranéennes project for a few weeks and is currently developing operations to investigate the impact of sexist and racist discrimination in their neighbourhoods and in their cities. Micro-sidewalks, round tables and slam competitions, among other initiatives, will soon be at work in the streets of Casablanca.

The week of International Solidarity

In Marseilles, Le Tamis organizes, within the framework of the Week of International Solidarity, workshops on identity. These workshops, related to the Tamis’Rideways, invite to collectively explore the social imaginary and to analyze the forms of interactions between the knowledge and the imaginary mobilized. On Wednesday 16th and Thursday 17th of November 2016, two artists and anthropologists, Annalisa Lollo and Laura Spica, lead a group of young residents of the Young Workers’ Home AAJT the Muse-Me workshop. Designed as a workshop for artistic creation, it invites participants to create crossed portraits, thanks to collages made from various materials. The superimposition of images and patterns evokes the construction of identity through time and space. The group of participants consists mainly of Foreign Isolated Minors (now Unaccompanied Minors).

This same Wednesday, on the Place Caffo (13003), Le Tamis proposes to carry out a performance called The Bearer of Speech. This activity takes place in a public square and invites passers-by to answer a question, written down in a visible way. It will be about questioning the perceptions, representations and imaginations of the passers-by, on the notions of identity, otherness, belonging and mobility, to gather their testimonies and to highlight them. It will be led by anthropologists Julia Henin and Alessandra Stefani. 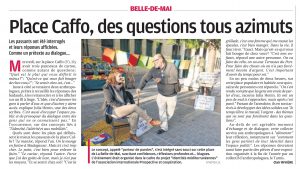 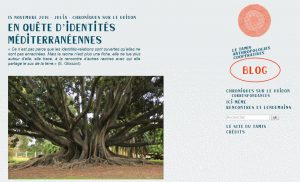 The blog of Le Tamis

With the support of

Leave a reply Click here to cancel the reply